A ways back in October 2016, Donald Trump promised 4% growth for the United States economy. (How’d that turn out?) Around the same time, the Federal Reserve Bank of San Francisco predicted a “new normal” growth rate of 1.5% to 1.75%. Thing is, Trump’s number wasn’t entirely impossible – even if it came from a place of ignorance. In fact, many economists today are predicting that artificial intelligence will drive unprecedented economic growth: upwards of 4.6% or more.

But how will this occur? Here’s the short answer:

We’ll start with some context. Worldwide, gross domestic product (GDP) has been pretty stagnant. Growth in many large economies has averaged a meager 1.1 percent since 2010. See this chart from a recent Accenture report, “Why Artificial Intelligence is the Future of Growth“: Things are about to change. Enter artificial intelligence.

Let’s define some terms. Capital measures the value of human-made goods and the means of production. Labor represents the work done by people, and the skills those workers possess. Economic growth occurs when capital or labor increase, or when they’re used more efficiently.

Historically, innovations like the steam engine and typewriter have either increased capital or labor, or helped people use them more efficiently. Artificial intelligence changes the game by acting as a force multiplier for both capital and labor.

AI’s ability to enhance both capital and labor is unique. According to the study by Accenture, artificial/augmented intelligence will nearly double global GDP in the next 20 years. These are numbers we haven’t seen since the 1980s. AI-powered technologies will help humans develop better tools to produce goods and services (capital), and let us focus our work activities (labor) on whatever produces the greatest value. And because it can learn as it goes, AI’s ability will only increase as time goes on. In fact, AI may be the single greatest economic growth factor in history.

But how will this look in practice? Let’s start with the impact of AI on white collar (office) work.

For data analysts and business users, “artificial intelligence” is a false flag. The real value is in augmented intelligence: machines that enable humans to focus on the parts of their job that add the most value.

For example, a company that provides risk modeling services to insurers is using AI-powered software to improve their underwriters’ risk-pricing abilities. This company’s AI can read 22+ million research papers in minutes. How long would it take a human to do that?

Because their AI handles the reading, this company’s data analysts can focus on analyzing. As a result, they’re able to price-risk more efficiently and more accurately. They can even create new insurance products to meet changing demand.

This is augmented intelligence in action in a white collar setting.

A recent Washington Post exposé describes factory workers in Wisconsin working in harmony with robots. This is a great example of AI driving growth in manufacturing. Where humans can’t or won’t do the work, intelligent machines fill in and make everyone more productive. 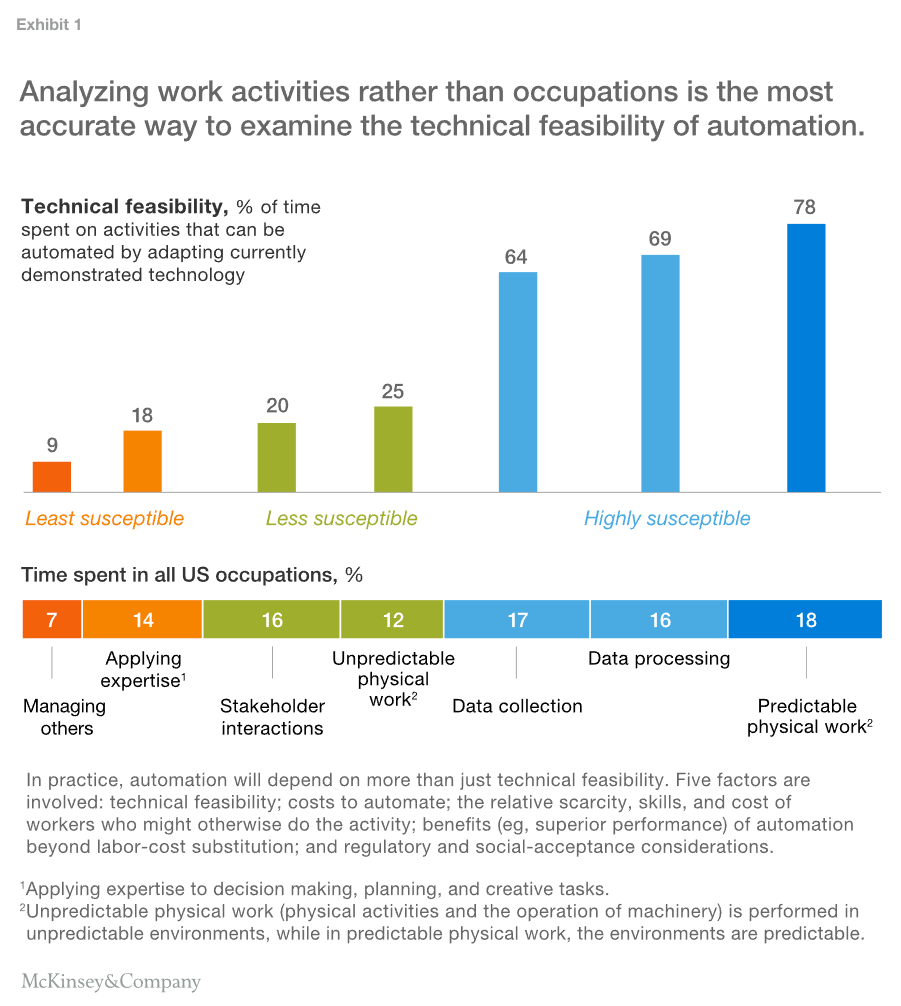 Now, the subject of AI’s impact on blue-collar work is an enormous subject in and of itself. In fact, I’ve written an entire article on the subject. Go check it out: AI Automation Armageddon: Fact or Fiction?

Wrapping up and further reading

I’ll leave you with a few more articles on the subject of AI’s economic impact and how that will occur.

How to Use AI to Solve a Business Problem – Forbes